Seven Questions on Seven Ways of Looking at Pointless Suffering 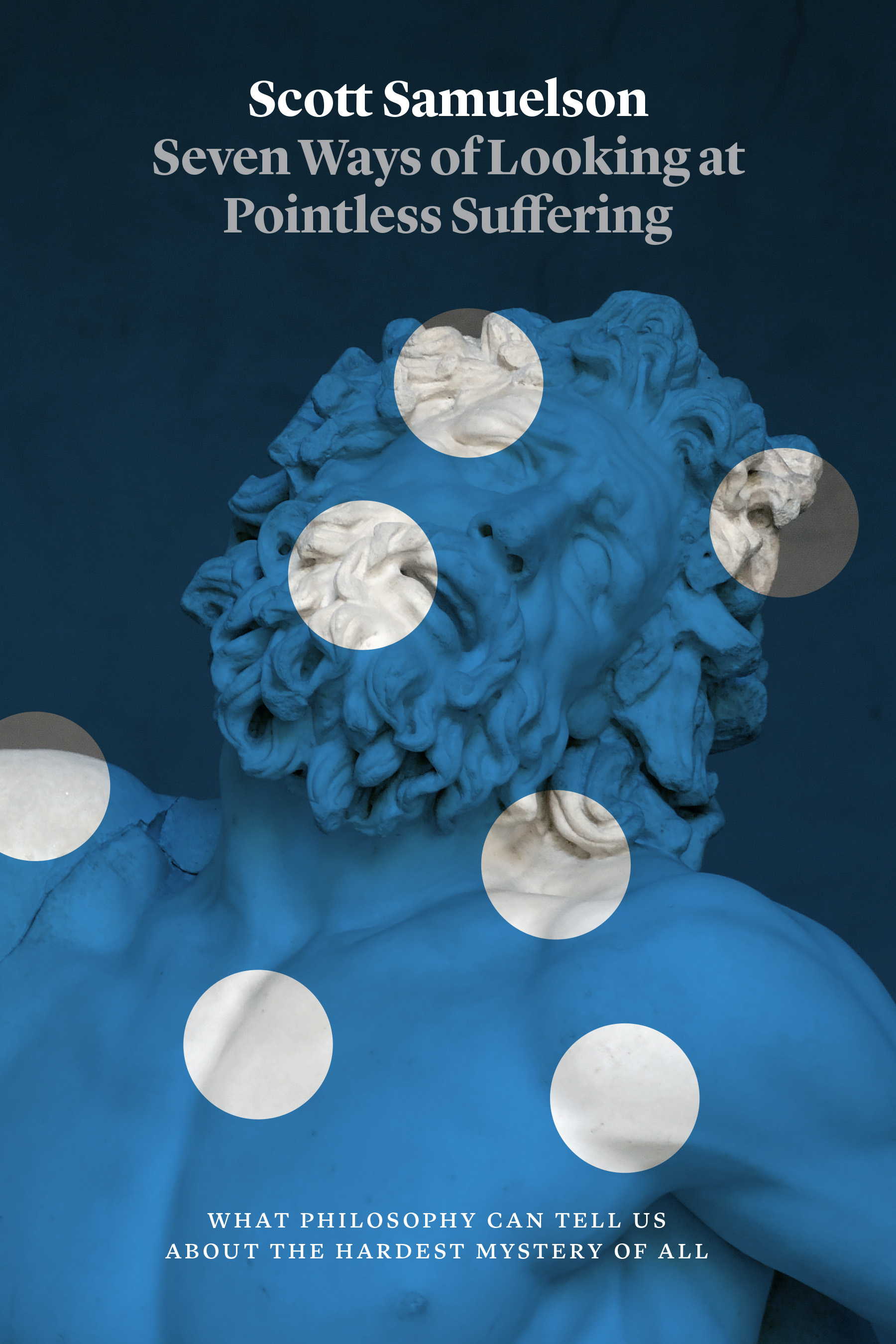 Scott Samuelson is a philosopher in an old tradition: he’s interested, not in some sort of academic philosophy that only talks to others who are deeply embroiled in its history and traditions, but rather in a philosophy that helps us deal with the problems we face in our everyday lives. His book Seven Ways of Looking at Pointless Suffering draws on his study of the discipline and his experience as a teacher of philosophy in a variety of settings–including in prison–to explore the many ways humans have attempted to explain, understand, and philosophically ameliorate suffering over millennia. Scott was kind enough to answer seven questions for us.

Have you looked at the news lately? Why on earth would I want to read about suffering right now?

Because we have a hunger to seek out meaning in the suffering that bombards us. Thoreau says, “Read not the Times. Read the Eternities.” Really, you should read both, but most of us could focus more on the Eternities. The fact is that there’s something deeply satisfying in thinking about suffering, just like there’s something deeply satisfying in a blues song. Once I was asked to lead a discussion at Laughing Sun Brewery in Bismarck called “Think and Drink”—the brilliant idea of folks at the North Dakota Humanities Council. I proposed the topic of suffering. They balked at first, “Don’t people go to bars precisely to escape suffering?” But I insisted. The event overflowed with attendees, all of whom boisterously engaged in the conversation. We experienced the joy of reading the Eternities in the Times, and the beers were delicious.

We will all suffer at various points in life to some degree. What value do you find in thinking about it, and about how we as a culture have thought about it, in advance?

Up to a point, I agree with the Stoics. By thinking about suffering in advance, we can transform how we see and face it. Stoicism asks us to rethink death, disease, and injustice as challenges rather than as evils. When we meet suffering, especially the everyday instances, we should have the attitude that an athlete does in the face of an opponent: “Bring it on!” But I can’t quite go all the way with the Stoics. I think that certain forms of suffering really do overwhelm us, and we can’t adequately prepare for them. In these cases, it’s less about what we do in advance than about how we respond after being knocked flat. One of the deep beauties of the arts and humanities is its treasury of grief, courage, and grace.

In your book, you out yourself as a bad dishwasher—to make a point: when we say labor is admirable, we’re missing something. There’s a difference between labor and work, one that’s important. Since I am currently at work typing this, could you explain that?

Labor refers to an unskilled, repetitive task done out of necessity: changing diapers, picking crops, doing dishes. The privileged have always found ways of pawning off labor onto others—slaves, women, children, the poor, machines. Labor is valuable mainly because it’s the condition on which life is given to us. It’s what puts food on the table. Because it sucks, labor can also be a way of reducing the ego, which is why monks sometimes devote themselves to laborious tasks. Work is something different, even though it often contains elements of labor. Work refers to contributing our unique, hard-won skills to a community: building, making, healing, educating. The product of work is something of lasting value. Work is hard, but it’s ultimately joyful rather than burdensome, because it involves the expression of who we are—in some ways, it is who we are. I think a good life involves both work and labor: work for the sake of our humanity and labor for the sake of our humility. Czesław Miłosz says, “To believe you are magnificent. And gradually to discover you are not magnificent. Enough labor for one human life.” So, I’m trying to get better at doing the dishes. The big problem nowadays is that many people find themselves in “bullshit jobs,” to use David Graeber’s apt phrase. These jobs are burdensome, as is all labor, and they don’t provide anything essential; in fact, they often make the world worse (this is what Arendt calls “the banality of evil”). They make us want to kill time and to try to purchase the identity that they prevent us from forging through work.

In discussing your work teaching philosophy to people in prison, you write, “Philosophers often use prison as a symbol of the condition most of us find ourselves in. We carry prison inside ourselves. A few unexamined concepts wall us off from our flourishing. The symbolic prison of the mind has the power to put others inside literal prisons.” What do you mean by that last line?

There’s a ridiculous number of our fellow citizens behind bars—including my friend Simon Tunstall, who, because of the Felony Murder Rule, is serving life without parole—thirty years and counting—for driving a friend to confront a pimp, whom Simon’s friend ended up killing. Why do we tolerate and even celebrate the injustices of mass incarceration? Why don’t we care about Simon? I think a big part of the answer is that we don’t think about it. By walling ourselves off from who we are and what we’re doing, not only do we impoverish ourselves, we harm others. Checking out of our lives can amount to checking others into prison.

You mention at one point that philosopher and psychologist William James is a hero of yours. I’m in that camp, too. What draws you to James?

I love how William James blends democratic freedom and spiritual nobility, like Sidney Bechet or Duke Ellington. James is philosophical jazz. A blues-understanding informs his whole approach to life. A student of his once recalled how in a fit of passion James declared to the class, “Gentlemen, as long as one poor cockroach feels the pangs of unrequited love, the world is not a moral world.” His pragmatism asks us to judge ideas by their fruits. How does his own philosophy measure up? Well, he helped Clifford Beers in the formation of a national movement to improve the conditions of the insane, which he believed was “one of the most crying needs of civilization.” He laid the groundwork for the Peace Corps, stood up for the feminist movement of his day, engaged in a letter-writing campaign against America’s imperialism, and opposed big bureaucracies “in favor of the eternal forces of truth which always work in the individual and immediately unsuccessful way, under-gods always, till history comes, after they are long dead, and puts them on top.” William James was a great teacher. When W.E.B. DuBois ended up in James’s class at Harvard, he exclaimed, “God be praised!” My favorite thing about James is that his voice is so alive. He’s my constant reminder that, as he puts it, “the philosophy that is so important in each of us is not a technical matter, it is our more or less dumb sense of what life honestly and deeply means.”

Have you seen The Good Place? If so, what do you think?

Except for football and reruns of Law and Order, I’m just not a regular watcher of TV. I did catch one episode of The Good Place and found it sharp and funny. I’m generally in favor of mocking paradise and moral philosophers.

What’s the one book you would give a young person to spark interest in philosophy?

It depends on the young person. Philosophy blended with literature, as in the novels of Simone de Beauvoir and Milan Kundera, often does the trick. You can’t go too wrong with Plato, Nietzsche, Kierkegaard, or Camus. One book I like to recommend, not as obvious, is Leszek Kołakowski’s Why Is There Something Rather Than Nothing?: 23 Questions from Great Philosophers. Let me just say that it’s my ambition to write the kind of book that makes readers catch fire with philosophy. Since I think of philosophy as a journey, I’m less interested in telling people where they should end up than in inspiring people to head off into the unknown.